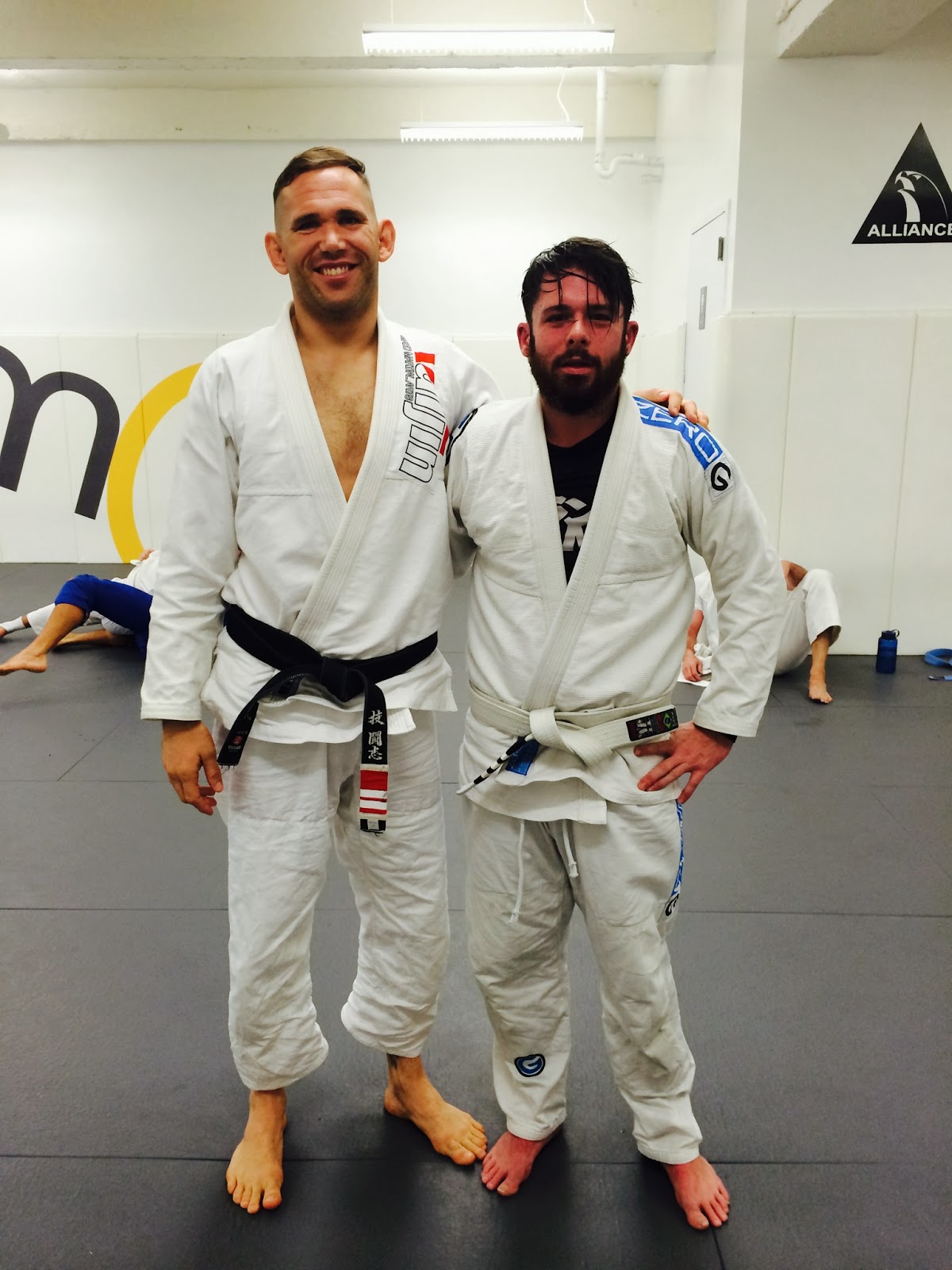 This is write up from my friend Tim that had the pleasure to train at MG.

In January and February 2014 I spent a little under 4 weeks training at Marcelo Garcia Academy in New York City (http://marcelogarciajj.com/mga/). I was heading to the USA for work and put some extra time aside to train at Marcelo Garcia Academy NYC. Marcelo is an absolute legend in the sport, a multiple time World and ADCC champion and a really cool guy. I had also been using mginaction.com as an extra training resource back here in NZ  and was looking forward to learning some of Marcelo’s game first hand.

My experience at the academy was phenomenal. It is a huge space, wall to wall with mats. In some of the busier classes (lunch time and 6pm) there were over 60 students in the class and there was still enough room for everyone to roll. Even the less popular classes (like the 7 am early morning class) tended to boast 25 – 30 students. The team that run the academy and the instructors are super friendly. Even though I was just a visitor to the gym everyone remembered my name from Day 1. I suspect that they get a lot of visitors as well – in the time I was there I rolled with people visiting from all over the USA (even someone from small town Alaska), some Europeans and Brazilians. At one point an entire team of 5 - 6 people from France had dropped in for a weeks training. 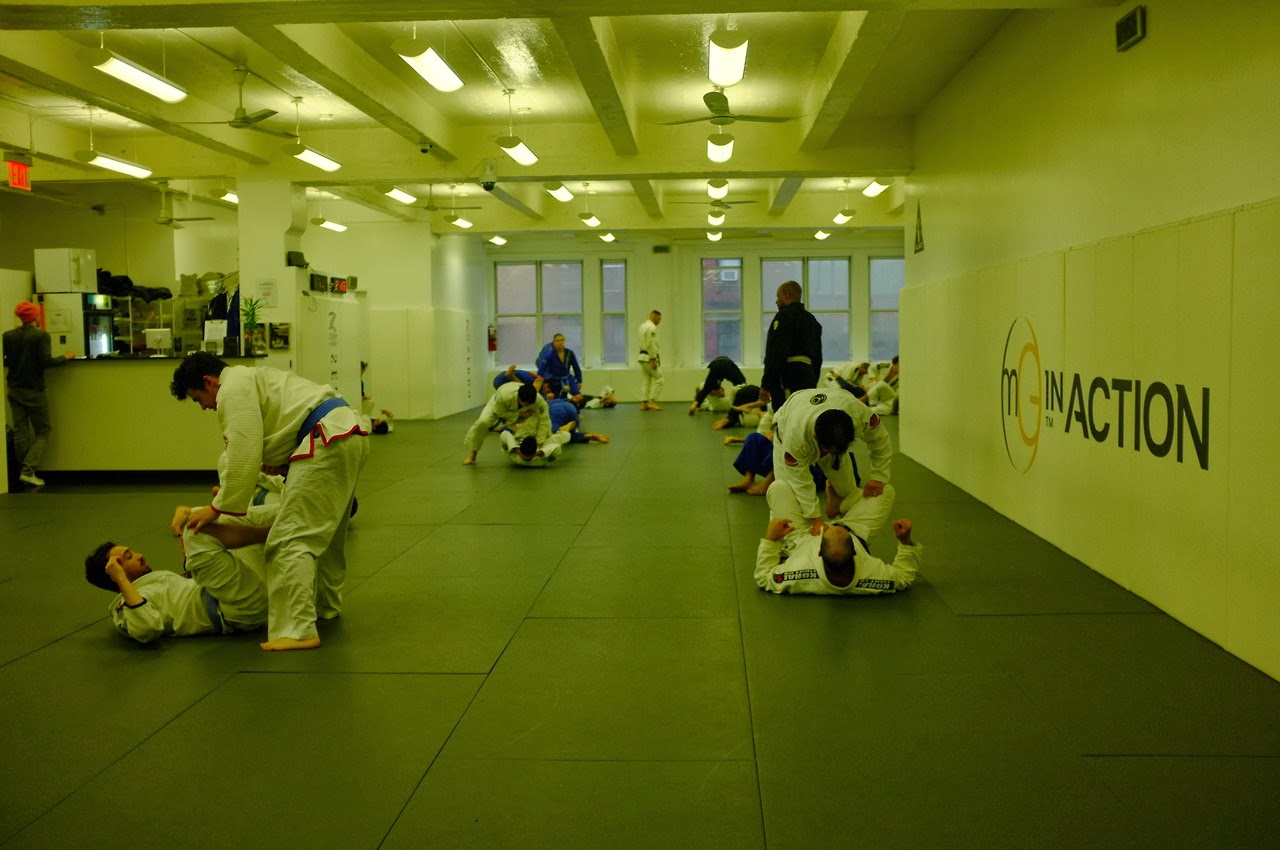 Like any Jiu Jitsu  academy you meet a variety of people at different skill levels – not just in terms of the colour of their belt but their ability, athleticism and intensity. It’s just like at home in that you have hobbyists, students that want to learn self defence, people who just want a fun way to stay in shape, and hard core competitors. The thing is, the hard core competitors at Marcelo Garcia academy are all world champions. As well as Marcelo Garcia, you have Bernardo Faria who is the new “head instructor” at the academy and the 2013 Heavyweight Word Champion (among other accolades). Then the younger guys you see in the gym every day such as Gianni Grippo, Mansher Khera and Jonathan Satava are all world champions at Purple and Brown belt. These guys are also excellent coaches in their own right, and the overall atmosphere they create at the academy is friendly, professional and helpful.

I also have to mention Paul Schreiner, who is an amazing coach and has been an instructor at MG Academy since it opened about 5 years ago. He is a phenomenal teacher. He has the rare ability to break a technique down into the minimum number of steps required to teach it while still containing a huge amount of detail. This has a profound impact on how quickly/effectively you learn something.  As well as his ability to break a technique down into the important details, he also explains how it fits within the context of your game, and also how it relates to fundamental concepts in BJJ. You get the sense talking to him that he thinks about BJJ in an extremely strategic/analytical way, and he is great at communicating this. 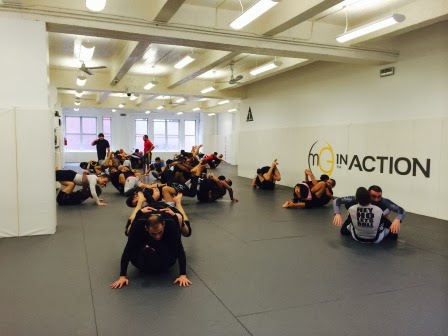 The classes at MG Academy are split into different technical levels - they have two levels of fundamental classes, two levels of advanced classes and expert classes. I didn't attend any expert classes which are purple belt and above only. The difference between fundamental and advanced classes wasn't what I expected. The fundamental classes seemed to cover off a wide variety of positions that didn’t fit my traditional definition of “fundamental”  - for instance as well as doing some closed guard work, Bernardo did a series covering De La Riva and Spider Guard  - neither of which I would have traditionally thought of as being “fundamental”. The advanced classes still covered a variety of positions but they focused more on the BJJ that you associate with Marcelo Garcia - butterfly guard, x-guard and the like.

The lesson structure would probably be familiar to anyone who has trained BJJ - dynamic/plyometric warm up, a position to learn, then training. Almost all of the classes at the academy are only 1 hour long - but they fit a lot into the hour by being very organised. They typically have 7 classes to a day and it isn’t uncommon for people to do two classes in a row - a gi class followed by a no-gi straight after. They also have drilling sessions a couple of times a week.  About a third of the classes are NOGi, the rest Gi. As well as using traditional warm up movements (like shrimping and break falls etc) they would often use a partner drill warm up that related to the movement/position that was being taught later in the class. For example a butterfly hook sweep drill as a warm up for a class that focuses on butterfly guard.  The position for the day normally involved two or three steps. For instance the class might start with a butterfly hook sweep as the first step. The second (and any subsequent steps) would then typically deal with opponent’s available responses and ways to counter them (i.e. entering 1-leg x-guard when they post their leg to counter being swept).

In about half the classes I attended the training at the end of class would be positional "pass-sweep-submit" or even "escape a bad position" training instead of full sparring. You and your training partner would start in a position that supported the lesson of the day (perhaps you are in turtle and your opponent has a seatbelt control - he has to submit, you have to escape, when one of you is successful you swap positions and reset). This is a fantastic way of training as a beginner because you get a lot of opportunities to implement the new movements you learn against a fully resisting opponent.

I would definitely recommend training at MG Academy – especially if you have any aspirations to visit the east coast of the USA (and you should). It's really an amazing group of guys and girls, and a great facility. The academy isn’t cheap for visitors - a day pass is $40 USD, a 2 week pass is $150 USD and a month is $270, but they are unlimited passes with access to 7 classes most days. With the training structure they have you could comfortably hit 2 - 4 classes a day if you were committed to training, and you will have the opportunity to test your jiujitsu against some of the best athletes in the world. You can check out https://www.mginaction.com/Default.aspx for a better idea of the sort of training they offer at the facility (there is a free 7-day trial available).