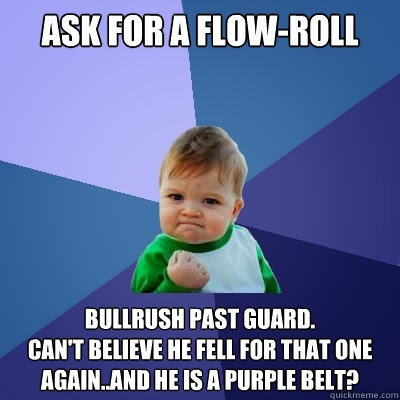 Midget wrestling is also known as fighting for take downs from your knees.

If you want to fight for take downs from your knees, you are wrong.

Just stand up and fight for the take down standing.

What is it so hard about it or dangerous?

Why is midget wrestling so wrong?

It is wasting valuable training time where you should be playing guard and trying to pass the guard.

So what happens, well after 2-3 minutes of tug of war on your knees, one guy end up cheating and stand up to run around and take your back or try to throw etc...

If it is freaking dangerous as well, the good old bum rush:
especially if you have both knees on the mats.

So what happens when you both training from the knees (also know as newaza in Judo)?
I suggest the higher grade or heavier guy just pulls guard.

Yes, no bully crap where you always force the lighter guard to play guard.

Yes, we get it, the guard is the weapon of the small and frail.

But this is training and you need to work on your guard.

Especially the big boys because it is always funny to see them on their back at the local competition.

They just lay flat on their back like beached whales because they never played guard at training.

At the local competition, you are likely to bump into a big guy as well and he could take you down first.

Next time you watch a video of Marcelo Garcia, have a look on how he spars and if he midget wrestle.