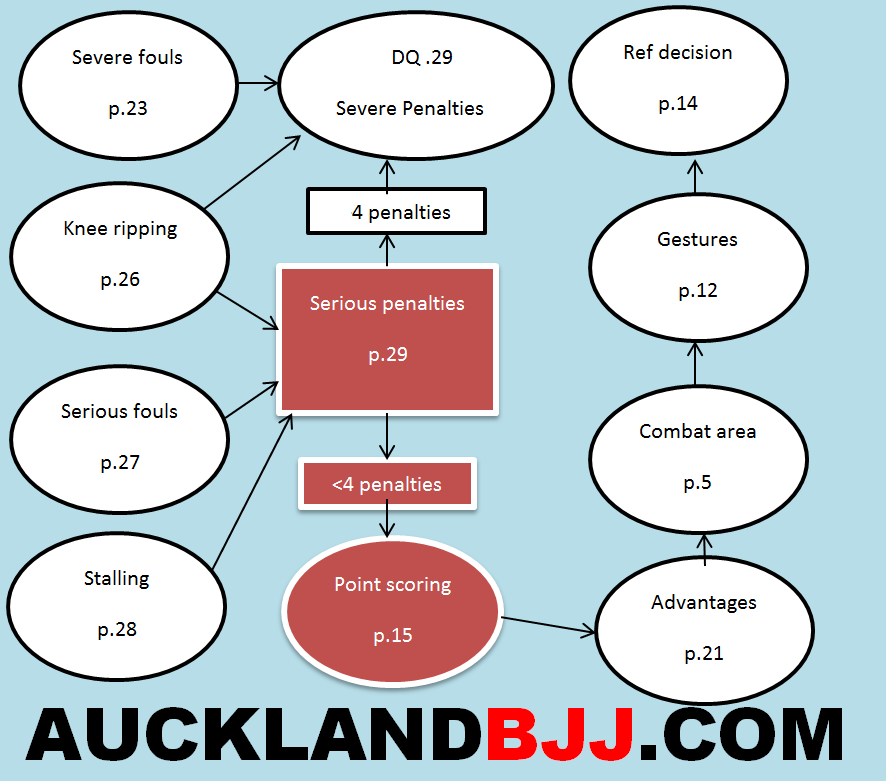 •Points shall be awarded by the central referee of a match whenever an athlete stabilizes a position for 3 (three) seconds.

•When the proper defensive counter for a submission hold results in exiting the match area, the referee shall signal 2 (two) points be awarded to the athlete applying the submission hold (as addressed in item 1.3.7).

•Matches should unfold as a progression of positions of technical control that ultimately result in a submission hold. Therefore athletes who voluntarily relinquish a position, in order to again score points using the same position for which points have already been awarded, shall not be awarded points upon achieving the position anew.

•Athletes who arrive at a point-scoring position while caught in a submission hold shall only be awarded points once they have freed themselves from the attack and stabilized the position for 3 (three) seconds.

•When one athlete comes to point-scoring positions but only gets out of the submission in hold without staying in these positions, he/she will not receive any advantage for that positions.

•Athletes who, in defending a sweep, return their opponent back-down or sideways on the ground shall not be awarded the takedown-related two points or advantage point.

•Athletes defending standing back-control, where the opponent has one or two hooks in place and doesn’t have one foot on the mat, shall not be awarded the takedown-related two points or advantage point, even after he/she stabilizes the position for 3 (three) seconds.

•Athletes who begin a takedown movement before the opponent pulls guard shall be awarded two points or an advantage point for the move, respecting the Takedown rules.
•When an athlete has a grip on his/her opponent’s pants and the opponent pulls open guard, the athlete with the grip on the pants shall be awarded two points for the takedown if he/she stabilizes the top position on the ground for 3 (three) seconds.
•If the opponent pulls closed guard and remains suspended in the air, the athlete will have to put the opponent’s back on the ground within 3 (three) seconds and stabilize the top position for 3 (three) seconds to be awarded with Takedown points.
•Athletes shall be awarded cumulative points when they progress through a number of point-scoring positions, as long as the three-second positional control from the final point-scoring position is a continuation of the positional control from the point-scoring positions from earlier in the sequence. In this case, the referee shall count only 3 (three) seconds of control at the end of the sequence before signaling the points be scored (e.g., guard pass followed by mount counts for 7 [seven] points).
In the case of the mount, when there is a transition straight from back mount to mount or Vice-versa—for being distinct positions—athletes shall be awarded four points for the first mount and another four points for the subsequent mount, so long as the three-second stabilization period was achieved in each position