What is Luta Livre? 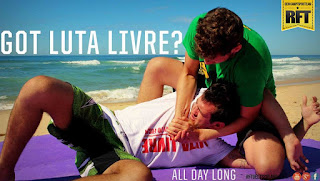 We do know much about Luta Livre apart the fact they do not train with the GI, that it originated from Brasil and was the rival of Gracie Jiu Jitsu for many generations. Videos of Luta Livre are rare and it is great to see Luta Livre Black Belt Nico Welco released some technical videos on his you tube account.
Enjoy.

Luta Livre is a complete Brazilian martial art, which is primarily a mixture of Catch wrestling and Judo. Luta Livre is a Brazilian based martial art that was created by Euclydes Hatem.[1][2] Euclydes Hatem went by the name of Tatu.[3] It was designed in Rio de Janeiro and means "free fight" in Portuguese(cf. "freestyle wrestling") also known as Brazilian Wrestling, or Sport wrestling. There are also striking techniques with hands, feet, knees and elbows. The name "Luta" is Portuguese for "Fight" and "Livre" for "Free", roughly meaning "Free fighting".[4] There are two styles known as "Luta Livre Esportiva" and "Luta Livre Vale Tudo". Both styles are no-gi. Noticeable practitioners are Marco Ruas, Ebenezer Fontes Braga, Johil de Oliveira, Alexandre Franca Nogueira and Renato Sobral