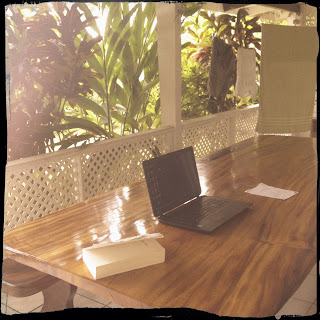 On holidays in Tahiti and catching up with my training report which I did not have time to post last
week.

In BJJ, side control is one of the most controversial position.
You are not allowed to stall from any position apart from mount and back control.
Side control seems to be the position where lot of people wants to stall from as it is like a stop over from the guard pass to more dominant positions (mount and back).
But somehow, the quick pit stop of 20 seconds becomes the Saint Grall of many practioners as they refuse to move foward after achieving side control.
Basically, we need to progress your position within 20 seconds or you risk getting a penaly against you.
The first penalty is "free".
The second penalty is an advantage for your opponent
The third penalty is 2 points for your opponent.
The fourth penalty is disqualification.

Also another problem with side control is lot of people thinks you get awarded 3 points for the side control.
That is incorrect. You get 3 points for passing the guard.
Establishing a side control for 3 control would mean you establish a guard pass and you get 3 points in return.
BUT you could establish north south, knee on the belly or mount instead for 3 seconds and you would get your guard pass points in return as well as other additional points for positions such as knee on the belly (2 points) and mounts (4 points).