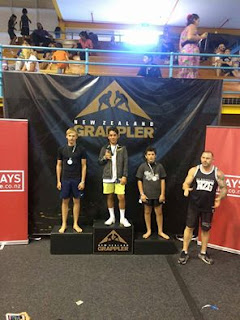 Just a few notes after an exciting day at the NZ grappler event.

Laurance won silver in his division and Webber won a bronze medal as well.

Patrick won his first match but lost his second match.
However, He did well for his first competition in NZ.
He is considering losing weight and enter a lower weight category for the next event of the NZ grappler Regional GI competition on 14 May 2016.

So 3 medals out of 4 competitors.
Great result and no one got injured (which is more important than the medals).

We will be also hosting our Master competition on Saturday 16 April.

Also this is the end of our NOGI training. We will be training GI on Tuesday and Thursday from now on until the NZ grappler National GI competition 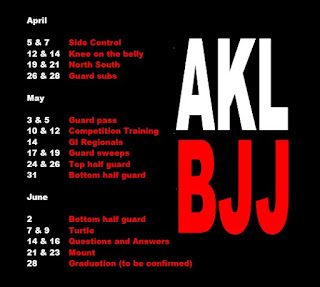 Also we need to make some patches and stickers for our team.
I just might have to have a vote to decide which logo to use as we have too many and I cannot decide which one to use. 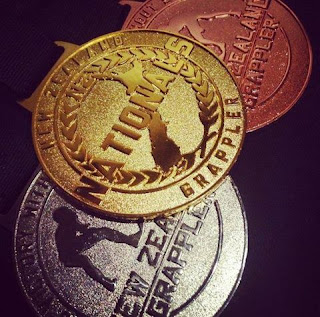 I met Renee from Fuji Mae and we will be placing an order of rash guard for the next competition as he can sublime our club logo at the back. $60 each and minimum 10 units order.

Also, the club has refunded half of the entry fee of our competitors. I just have to refund Patrick at the next training as I forgot on Saturday.

The 100$ Challenge: I decided to split the purse in 2 as Webber and Dom had a submission each.

Well Done and it was great to see so many supporters turning up on Saturday.